Last month Sho Baraka released his fourth album, The Narrative, which is undoubtedly one of the year’s best music releases. Exploring differing genres of sound yet sounding fresh and relevant, Sho has produced an album that is as thought-provoking to listen to as it is enjoyable.

Laura Bennett recently caught up with Sho to talk through the album on radio show Fresh Across Australia, including why each track is labelled with a date, and his decision to sign with Humble Beast Records. 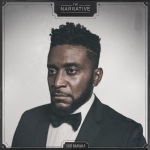 The Narrative by Sho Baraka is available now on iTunes, and as a free download at Humble Beast.