Last month Manchester indie-worship act Rivers & Robots released their fourth album, The Eternal Son. The band began as a solo project for Jonathan Ogden, but has since expanded to a four-piece, and the group see themselves as ‘missionaries’ to their local area. I spoke with Jonathan on my radio show, FRESH Across Australia, about their local mission:

‘Yeah, that has been going about a year now… We wanted to do it full time… We ended up quitting our jobs and rather than getting into the common trap of having to sell a certain amount of albums to pay for living costs, putting an unnecessary pressure on ourselves… we wanted to take that pressure off so we decided to live as missionaries, raising our support from churches and friends and family, and all the money we get from the band goes back out into ministry…We run free worship nights in Manchester, where we go into pubs and secular gig venues. It’s become an evangelistic thing.’

The new album The Eternal Son especially focuses on Christ, and his eternal nature as described in Scripture. Jonathan revealed the title is about looking at God’s eternal nature:

‘Generally the title is the last thing we come up with, I look through the lyrics and pick something out but for this one we did a Kickstarter campaign so I had to pick a title early! We hadn’t finished writing the album when I picked the title out. After I picked it I wrote the title track… The whole theme of the album is looking at the temporary nature of earth and the eternity of God. It’s a joyful album and one that we wanted to capture that can get caught up in… Taking your eyes off your own situation and look to God… and the freedom that comes from doing that.’

We also discussed tracks Fullness of God, Highest Place and High Priest, and discovered that their biggest fanbase isn’t actually in the UK! Listen back to the whole interview below: 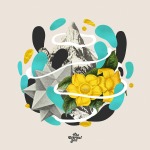 The Eternal Son by Rivers & Robots is available now on iTunes.