A few weeks back, Zach Bolen (who you may know as the frontman of Seattle’s Citizens & Saints) unleashed his debut solo album, 1001. It’s an album of stories about growing up and leaving home, falling in love, and navigating relationships, and we gave it 4.5 stars on review.

I spoke with Zach to hear the stories behind the songs on 1001, and he revealed it’s somewhat of a memoir:

‘The songs, I’ve been writing them for well over twelve years now. They’re a lot of different types of songs, about leaving home, my wife and I meeting, relationships with lots of people… I feel like every song I write they hint and mention where I’m at in life. There were tonnes more songs written in the process, but these are the ones that stood out and the ones I wanted to share with people.’

He also explained the title of the album – it’s got a deeper meaning than just a number:

‘It’s about a time I ate 1001 cheeseburgers. No [laughs]… Growing up had good things, bad things… For me, the bad is what made me desire to leave where I grew up and start something new… I felt I was forced into this life… I was naive and prideful, but I was also young and I had an innocent desire to head out into this world. So, 1001 is essentially saying, up until the point when I left home… there was a thousand stories that could be told, but the one that really mattered didn’t matter until I left home, and that was 1001. That’s where the story started to make sense…’

‘[The 95 is] an Interstate highway on the east coast, from Florida past New York City, through the New England states. For me that was a significant road. When I left home, that was the road I drove twelve hours to go to college. It’s a bridge from where I started and ended… I always remember that drive, back and forwards by myself at night… Enjoying the solitude that came from it.’

We also discussed the tracks I Will Let You Down, Give It Time and EP track I Want to Die, and whether it might take another twelve years for the next solo album. Listen back to the whole interview here: 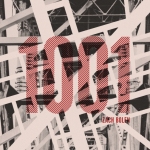 1001 by Zach Bolen is available now on iTunes.