Alligators are ferocious creatures. Often lurking quietly, they are known to snap up their prey by surprise, with aggression.

Although Kansas band Abandon Kansas may not have named their new album Alligator after the creature for these particular qualities, I found this to be quite an apt metaphor for the sound of the record. If you think you know the band from their CCM singles such as 2012’s Turn It To Gold, think again. This album sounds nothing at all like those songs of yesteryear, instead Alligator is an album of lament, filled with punctuated tunes with confronting, often aggressive lyrics.

Thematically, Alligator is a miserable record. Most of the songs describe sadness, loss, grief, struggle, and heartbreak – but don’t let this put you off. It’s actually really refreshing to hear an album from a bunch of Christian artists who are willing to share that not all is OK. It’s real. As lead singer Jeremy Spring shares stories such as the ones behind Anniversary and What You Meant, we are brought into lump-in-your-throat territory.

The album enters us into an existential crisis on album opener Mirror. Words of desperation and hopelessness – ‘I’m so sick of trying! Is this living or dying?’ – are screamed with blistering force. The oddly-titled “i hope God don’t mind if we talk awhiles…” opens with confronting lyrics and targets a darker side of the church in a harrowing way. Musically the song shifts between styles, but keeps a blissful rock vibe constant.

One of the more upbeat, driven tracks on the album is Baby Please. With great grooves, stylistic shifts, and bass and drum movements, this track has hints of Smashing Pumpkins circa Tonight Tonight – just listen for the bells! Anniversary is a song that will send chills down your spine – as a story of a broken marriage is told from the perspective of both parties. Although it becomes a power ballad of sorts, it’s a song of real anguish. Get Clean opens with a bunch of voices down a telephone line, descending into a song filled with questions. It’s yet another song of helplessness, with Jeremy desperate to get clean: ‘Yesterday took everything from me. How will I get there today?’

Shadows has tinges of prog rock, and comes to a screaming finish. It again brings a very hopeless look at life: ‘Life’s a comedy for those who think, and a tragedy for those who feel.’ What You Meant is a song from Jeremy about losing his father – it’s just him and his acoustic guitar – and he breaks into tears by the end of the song. There’s a real Conor Oberst quality to not only the sound, but the storytelling. It’s beautifully sad.

After so many questions, signs of hope appear on You Oughta Know. Together with syncopated rhythms, angular guitars and slick pop vibes, Jeremy reminds himself and us of where true hope lies – not in sex and money, but in God. ‘Only love will make you whole. Only God can save your soul. You oughta know by know.’

One Foot in the Grave closes the album, an upbeat yet dark song. It’s a song about how hard it is to actually live when you’re suffering, or under the influence of medication. ‘I don’t feel alive.’

Alligator is a snappy, confronting record that makes great leaps into the dark world that we live in, and the daily anxieties and sadness that many of us feel. Having broken free of record labels and CCM music, this is Abandon Kansas showing their true colours, and the music is excellently constructed and produced.

Honestly, I wished the album offered more hope amongst its moroseness, but I realise how personal the words and situations are to the band, and maybe they’re still working through these struggles. They prove to us that life is hard, life sucks at times, and only God can save our souls. I’m giving Alligator three-and-a-half out of five stars. 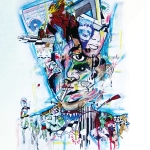 Alligator by Abandon Kansas will be released Tuesday 12th May, and can be pre-ordered here. Keep an eye for our chat with Abandon Kansas about the album in the coming weeks.