Dustin Kensrue has been charming us with a number of releases under a few guises across the last few years. Whether it be raucous releases with southern California band Thrice, his bold previous solo album The Water & the Blood (2013), or music written for churches under moniker The Modern Post, Dustin has a real gift to create music for different spaces.

Dustin’s forthcoming solo LP, Carry the Fire, sees him move away from a church stage and into genre-bending territory. This is not a follow-up album to the worshipful The Water & the Blood, but rather his previous solo effort of 2007, Please Come Home. Carry the Fire contains personal lyrics, many deep questions, and arrangements that are a delight to wrap your ears around. That said though, there is no shortage of spiritual themes to be mined here.

Carry the Fire is an album of contrasts. Light or darkness, genuine or fake love, warmth or coldness… these and many more pop up again and again.

Ruby is the song that opens the record, and it’s a doo-wop love song that sounds straight from the 60s. It’s a very powerful opener, and might come as a surprise stylistically, even to fans of Dustin’s varied catalogue. Using the name Ruby as a play on words, Dustin cries out, ‘I’d trade all the jewels in the world… Ruby you’re all that I want, my heart and my treasure.’

Dustin’s hoarse vocals are showcased on the western Back to Back, before leaping into the heavy yet catchy Gallows, a song that features some dark lyrics: ‘You built these gallows you’ve been hanging from, and you’ve got nothing to lose, so just let go.’ It’s one of the highlights of Carry the Fire, and although repetitive lyrically, it’s driven by guitars and a solid groove.

There’s Something Dark Inside of Me comes as a sombre turning point on the album, a melancholy folk song of reflection. Over restrained guitars, Dustin shares in anguish that there’s darkness inside of him, and this causes us to reflect on what darkness is also in us. I found this track to be quite sad in words and sound, but quite stirring nonetheless.

Death or Glory is more upbeat, and Dustin shows off his storytelling prowess – ‘I feel something’s coming for me – is this death or glory – that hangs like lightning in the air?’ In the Darkness moves along like a Springsteen song, and is more positive lyrically than any of the tracks that precedes it. Dustin sings of being in the darkness, and finding a companion in the hard times – ‘I’m always running scared in the darkness, could it be you’re really there?’

For me, the highlight of the record (and, song of the year so far) is Of Crows and Crowns, a gorgeous song that will soon become a staple at weddings worldwide. The mix from producer Brian Eichelberger is just stunning.

A folky swagger ignites What Beautiful Things, a restrained song of joy and celebration that literally explodes – just when you’re expecting proceedings to draw to a close. ‘I lift my gaze from my wicked ways, and I sing, ‘Oh what beautiful things I’ve seen’

Carry the Fire closes with the title track. While it starts soft with synth pulses that would fit a Tron soundtrack, it builds into a very strong finish. There’s real anguish in Dustin’s voice, which match the words of endurance: ‘Though the night is cold, we’ll carry the fire.’

No matter what facet of Dustin’s back catalogue you love most, you’ll adore Carry the Fire. It’s a journey through joy and grief, faith and surrender, matched with an energetic soundtrack. I’m giving Carry the Fire four-and-a-half stars. 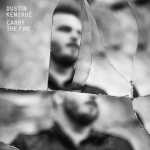 Carry the Fire by Dustin Kensrue will be released Tuesday, 21st April and can be pre-ordered on iTunes. Keep an eye out for our chat with Dustin about the album in the coming weeks.

One thought on “Album Review: Dustin Kensrue – Carry the Fire”