On a July morning in 2005, I was woken by my bedside alarm at 2:45am. I switched my radio to triple j, where the feature album of the week had transfixed me like no album I’d ever heard before. The album was peculiarly titled Come On! Feel the Illinoise! and was by an artist I’d never heard of and whose name I couldn’t pronounce, and nor could anyone at the radio station. Sufjan Stevens. The feature album was to be played in full at 3am, and presenter Terri Psiakis apologised that she would be skipping some of the repetitive instrumental tracks, as she didn’t want to annoy anyone. I hit record on my cassette player and went back to bed.

Ten years later, …Illinoise! has become one of the most loved albums of the past decade. I ended up ordering a CD only a few weeks after recording to cassette, and have seen Sufjan play live in Sydney twice – on his first tour in 2008 and on the back of his Age of Adz album in 2010. Sufjan Stevens claims to be a Christian, and so many believers have purchased his records and hail him as an indie hero. I’m not going to spend much time on this (there’s a great article over at CT Today) but instead want to put his brand new album, Carrie and Lowell under the microscope.

The first thing that stands out about Carrie & Lowell is just how personal it is. Stevens has released albums about American states, Christmas albums with songs about unicorns, heck – he even released a piece of music about a section of a road a few years ago. But never before has he opened up about his life and his fears as he does on this album.

The album is named after his mother and stepfather, and the usually private Stevens opens up about his relationship with them. His mother passed away since his last album, The Age of Adz, released, and this has clearly caused him to question much about life and his faith.

The other thing that stands out on this album is that it’s a real miserable listen. Not that it’s unenjoyable to listen to – but it’s ridiculously sad. I described Sufjan’s last album as “a walk through a forest with laser beams” but that couldn’t be further from the sound of this record. It’s folky, sombre, and very, very stark.

Most of the tracks on Carrie & Lowell are extremely delicate, and contain questions, such as opening track Death with Dignity: ‘What is the song you sing for the dead?’. Real beauty in sound filters through on tracks Should Have Known Better and Eugene; but distress and sadness hit hard through the words and arrangements of Drawn to the Blood and Fourth of July. The latter repeats the line ‘We’re all gonna die’ and is sure to raise questions about worldviews among both believing and unbelieving audiences.

Of all the haunting tracks on Carrie & Lowell, I was confronted most by John My Beloved, where Stevens reveals that he knows the state of his heart; and also that his faith is what he leans on when all else fails.

I am a man with a heart that offends

With its lonely and greedy demands

There’s only a shadow of me

In a manner of speaking I’m dead

If you struggle to think about the reality of death, then this album will make you squirm. But why not think through what Stevens says on this album and chat to your friends about it? All the cool kids will be listening to this record, and perhaps the questions raised to do with suffering and death could be a launchpad to discuss what happens after this life is over?

My excitement and love for Sufjan Stevens’ records has not changed since that cold winter’s morning ten years ago. Sufjan Stevens has always had the ability to take you to places with stellar storytelling, and in doing so mess with your emotions. He does that so well here on Carrie & Lowell. I don’t think this is Stevens’ best work, but it is most certainly his most intense. Stock up on tissues. Four stars. 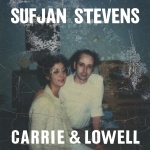 Carrie & Lowell by Sufjan Stevens is available now on iTunes. You can stream the album in full above.