Skrip is a talented guy. Renegades Never Die is Skrip’s first solo album, and the Chicago-based Christian hip-hop artist not only raps, but also sings most of the tracks, plus he beatboxed, and even produced it all himself. This sounds impressive, and it’s even more impressive when you hear the quality of what he’s made. He is no amateur at any of these skills, and it’s hard to doubt that he’s going to go far.

Approaching his music for the first time, I wasn’t sure what to expect. The title, Renegades Never Die confused me, and the cover seemed to be some kind of throwback to gangster hip-hop, as though it was promoting the mainstream cultural messages of hip-hop. That was my first impression, but I couldn’t have been more wrong.

The album is a bold and unashamed rebuke of American idolatry, particularly idols in hip-hop culture, and a call to forsake the sinful and foolish ways of this world and to pursue the kingdom of God.

Idols is an excellent introduction and summary of this message, a powerful rebuke of idolatry. Like Elijah and the prophets of Baal (1 Kings 18), Skrip mocks the arrogant pride of mainstream artists elevating themselves as gods, and calls them to humble themselves by seeing God’s true glory. ‘Thinking that you sit on your throne, acting like you’re all so divine, while you’re searching for a sign, the blind leading the blind.’

Over an eerie strings intro yet hard-hitting hip hop beat, Idols establishes the big problem that the album addresses – we are blind and dead in our sins, and need to be restored in our worship to the true King, because “there’s only one throne that’ll last forever”. Idols was one of my favourite songs on the album.

Musically, the album is heavily influenced by dance, club and pop music. Whether or not this is your scene, it isn’t hard to appreciate the rawness and passion that drives along Skrip’s message. Most of the sounds on this album range between these three musical influences (as well as hip-hop), and are all heavily driven and upbeat. Songs like Go On, Este Fuego and When the Beat Drop are like this, but what I loved about them most was Skrip’s lyrics – his unashamed declaration of Jesus Christ.

With this kind of skill in the music industry, Skrip is definitely capable of using his talent to excel in mainstream hip-hop, whether as a producer or as a hip-hop artist. Yet as an artist, his allegiance is with Jesus, and he is not afraid to declare it, hence his label as a “renegade”, or a rebel.

Tonight has heavy dance and club influences, and while a club song called “Tonight” may have you concerned, it’s not a call to live YOLO – it’s a passionate call to hate sin and pursue God’s kingdom, with a sense of urgency.

This song powerfully reminded me that as a Christian I’m still not perfect and need to be rebuked so that I can live for God better. Skrip calls us to live unashamed, and not just in words or in a label. He says, ‘You’re repping three numbers (116), but you’re living ashamed… It’s time to rep the only one who’s holding a crown.’

A Better Way addresses sexuality and relationships, calling us to take responsibility for sexual purity, and to take it seriously. I think men especially should pay attention to what Skrip has to say here. The rest of the songs continue to articulate Skrip’s faith and message; what it means to live for Jesus as a man in his position, and the hope that is available to us through Jesus.

The album comes to a conclusion with Let It All Out, an articulation of the pressures, struggles and the cost of being a Christian musician. He describes the doubts, insecurities and anxieties that come along with it, yet leaning deeper on God in the process. Surprisingly, the last track, Destiny’s Prelude, is an eerie instrumental, ending quite similarly the way the album started on Idols. It encourages us to reflect on all the thoughts raised on the album as it concludes.

Through personal testimony, Skrip shows that as an articulate Christian and skilled musician, he is a “renegade”, or a rebel; he offends many because he proclaims the Good News of Jesus. Yet through his high quality music and transparency as an artist, he is able to break down many of the perceived barriers of his Christian faith to a mainstream audience. This is one of the things I respected most about the album.

There is always a lot happening musically in every song, and sometimes a little too much. Every track is quite upbeat, with dance, club and pop influences. This can be a little overwhelming, but overall I liked the album a lot. Not only is it well produced, but it is unashamedly Christ-centred.

Skrip has the talent to go a long way. But most importantly – he has the character and conviction to represent Christ well on the platform he’s been given. I give Renegades Never Die three-and-three-quarters out of five stars. 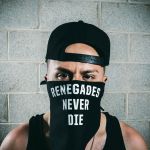 Renegades Never Die by Skrip will be released Tuesday, 24th February. You can pre-order it now on iTunes. Read Carlin’s interview with Skrip about the album here.