Not even a year after dropping his first studio album Heroes For Sale, New York rapper Andy Mineo is back with a stunner of a new record. It’s called Never Land. Over the past month four behind-the-scenes videos dubbed Saturday Morning Car Tunes (SMCT) Season 2 have caused us all to drool with anticipation as we’ve caught glimpses of the record coming together.

Across seven tracks Mineo teams up with a big bunch of guests including labelmate Canon, Marz, and Dimitri McDowell; as well as six different producers who help fashion the sound of the record. Never Land has been crafted incredibly well and blows the idea of daggy Christian music right out of the water. Sure there’s banging beats and rhymes spat out at high velocity, but Andy and pals know when to pump the brakes and slow things down on a couple of reflective numbers.

Title track Never Land (feat. Marz) kicks off the record and is extremely smooth in sound and production. It’s a great reminder of the emptiness of wealth and fame, even though it’s something we desire and chase. It’s a dangerous trap: “The rich and famous kill themselves to stay rich and famous / The very thing that they built their name with, be the same thing that they be enslaved with.”

Perhaps the most fun track on the album is Paisano’s Wylin’ (feat. Marty of Social Club). It features a club beat that wouldn’t go astray on a Major Lazer record. Best part? It name-checks Chewbacca and Fozzie Bear’s famous catchcry. Oh, and bonus points for using the word ‘kapeesh’.

As previewed in SMCT, the track You Can’t Stop Me is one to crank in your car with the windows wound right down. The message is really calling us to fear God and live for him and him only – not even for ourselves! Not only will ‘You Can’t Stop Me!’ become a catchcry, the track is bonkers. Mark my words, it has potential to become the Harlem Shake of 2014.

The middle of the record is an opportunity for a bit of reflection, in the tracks Rewind (feat. Kam Parker) and All We Got (feat. Dimitri McDowell). The latter is one of my favourites on the record, with an R&B grind and a very sweet nature. It’s a real breather on the record, and a humble reminder of what really matters:

“Trying to go from selfish to selfless / Not just trying to think about my needs but someone elses”… “Do I worship God or what other people think of me?”

We spend all our days searching for security in this world, fearing man more than we fear God (which is sinful). Really, God’s love in the person of Jesus is all we’ve got.

Paganini (feat. KB & Canon) brings the pace back to the album with a truly frantic beat. The song refers to a violin player from the 1800s named Niccolò Paganini who was such an incredible player his listeners thought he was possessed. There’s great production on this one: from the distorted hi-hat crunch to the masterful beatboxing to the strings. Strings!

Andy Mineo has made a superb record in Never Land but perhaps saves the best for last.  Death of Me acknowledges that dreams come true in hip-hop but it comes hand-in-hand with a stack of temptations.

It’s a nice close to the record as Mineo humbly admits the crossroads at which he stands. Realising that the industry has a lot of pull and he needs to stay grounded, Mineo knows that really, Jesus is the only one who can help him do that. Jesus retreated to speak with his Father, and he knows he needs to make a priority to spend more time with God too. Mineo is honest and admits that temptation and sin could be the death of him – which is true for all of us! It’s wonderfully refreshing to hear this on a hip-hop record.

Never Land is packed with fun tracks and seriously ace production but it thrives in the quiet, honest moments. It’s a fantastic record that I think you should get your ears around right away. 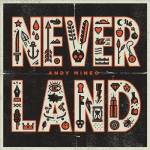 Never Land by Andy Mineo is available now on iTunes.